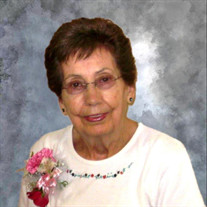 Dorothy Arnold, 90, passed away February 10, 2022. She was was born in Clarksville, Arkansas, on March 2, 1931. The daughter of Thomas H. and Ruby Lillian Harvey Griffin, she was the tenth of eleven children. She married George L. Arnold in Puxico, Missouri, on August 28, 1954. He proceeded her in death on January 20, 1994. Dorothy was a homemaker and a partner to her husband in his construction business for many years. In her later years, she worked for Dunn Hospital as a switchboard operator, retiring in 2009. Dorothy was well known around town for her bread. Her grandson’s dubbed it Nani Bread and others called it Dorothy Bread. She loved nothing better than baking and giving away numerous loaves over 30 plus years. Dorothy is survived by her three children, Marilee Arnold, Larry (Karen) Arnold and Martha Arnold-Turner, all of Bedford. She is survived by five grandsons, Nicholas (Jessica) Arnold of Dayton, Ohio, Ryan (Trisha) Turner of Bedford, Gregory (Chiharu) Arnold of Las Vegas, Nevada, Timothy Arnold of Bedford and Stephen (Gabi) Arnold of Bedford. She is survived by six great grandchildren, Lydia and Addison Collins and Bayne Arnold, all of Dayton, Ohio, Maxwell Turner of Bedford, Curtis Arnold of Las Vegas, Nevada, Anthony Maldonado of Bedford, and Wesley Arnold who will join the family in July. Dorothy is also survived by her sister, Jean Sanders Roberts of Bedford and her sisters-in-law, Sue Ryan Griffin of Bedford and Lola Griffin of Puxico, Missouri. She is also survived by many beloved nieces and nephews. She was preceded in death by her parents, her husband and six brothers and three sisters. She was a longtime member of Landmark Missionary Baptist Church. Funeral services for Dorothy will be held at 6:00 p.m., Thursday, February 17, 2022, at the Ferguson-Lee Chapel of Thorne-George Family Funeral Homes in Bedford with Bro. Tim Sumpter and Bro. Martin Lamb officiating. Burial will follow in Sebastian Cemetery, Fredricktown, Missouri. Visitation will be on Thursday, at 2:00 p.m., and continue until the hour of service, also at the Ferguson-Lee Chapel. Online condolences to the family may be made to www.FergusonLee.com. In lieu of flowers, the family asks that memorial donations be made to Landmark Missionary Baptist Church, P. O. Box 1292, Bedford, Indiana, 47421.

Dorothy Arnold, 90, passed away February 10, 2022. She was was born in Clarksville, Arkansas, on March 2, 1931. The daughter of Thomas H. and Ruby Lillian Harvey Griffin, she was the tenth of eleven children. She married George L. Arnold... View Obituary & Service Information

The family of Dorothy Arnold created this Life Tributes page to make it easy to share your memories.

Send flowers to the Arnold family.