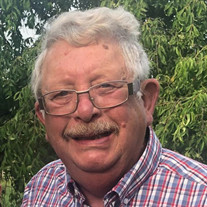 James “Jim” A. East, 68, of Bedford, passed away on Monday, Nov. 30, 2020 at I.U. Health University Hospital, Indianapolis. He was born April 20, 1952 in Bedford, the son of William and Nina (Stanard) Arthur, Sr. He married Betty Nicholson on Feb. 26, 1972 and she survives. Jim graduated from Tunnelton High School, class of 1970, and attended White River Baptist Church. He retired from GE in 2014 and had worked at Mills Market, West. He loved reading his Bible, fishing, hunting and wildlife. He was a member of the Army National Guard. Surviving to cherish Jim’s memory are his wife, Betty of Bedford; one son, Bronson D. East of Bedford; one daughter, Arin L. (Byran) York of Elkton, Maryland; two grandchildren, Matt York and Ella York; his father, William; two sisters, Karen (Melvin) Reeves of Springville and Nancy Marcott of Corinth, Texas; one brother, William H. Arthur, Jr. of Bloomington; and several nieces and nephews. Jim was preceded in death by his mother, Nina; one brother, Raymond L. Arthur; and one brother-in-law, Terry Marcott. Funeral services for Jim will be at 1:00 p.m., Thursday, Dec. 3, 2020 at Dive Cemetery, Bedford, with Minister Rick Leach officiating. Visitation will be held from 12:30 p.m. until the hour of service at Dive Cemetery. Military rites will be accorded graveside by American Legion Gillen Post #33. Memorial contributions may be made to the White River Humane Society of Bedford. Online condolences may be sent to the family at www.FergusonLee.com.

The family of James "Jim" East created this Life Tributes page to make it easy to share your memories.

Send flowers to the East family.